Ambient Lighting is really nice – and supposed to be healthy for your eyes as well! 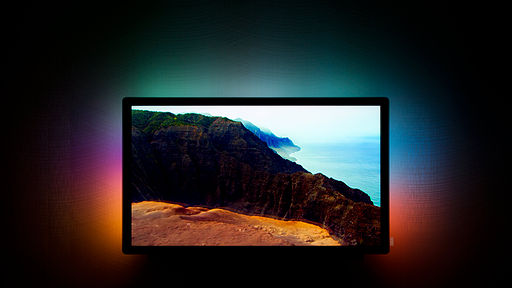 (By Stephan Legachev (Own work) [CC BY 3.0 (http://creativecommons.org/licenses/by/3.0)], via Wikimedia Commons)
E.g. Phillips sells it as Ambilight for their TVs and there’s also many KITS on the internet that help you implement ambient lighting for your TV.

Fortunately but in this case UN-fortunately I have a projector at home – watching all my favorite DVDs, movies & clips from an attached laptop. So how to do ambient lighting then?

Once the colors are analyzed, they’re being sent to the Arduino via it’s USB port – via the C# Serial Port.
On the Arduino Pin 6 is being used to communicate via PWM with the LED Strip.

Wiring up the LED Strip..

I seriously recommend reading the Adafruit NeoPixel Guide, which talks about why you need a capacity & resistor as well as other important tips for wiring up the NeoPixels or compatible devices.

Now the wiring is done, let’s start with the software for the Arduino.
After playing around for a while with hardcore Arduino code, Josh Holmes on my team pointed me at FIRMATA.
That’s a protocol to control all Arduino Pins via Serial Port from another device.
This is *absolutely* the right thing for this project.. Because of the screen ripping it requires a PC anyways, so I saved a lot of time on coding for Arduino, instead wrote all the logic on the PC and had it “remotely” use Arduino’s Pin 6 via Firmata. There’s a branch of FIRMATA, that already has support for the NeoPixel Library from Adafruit in.

Here’s the steps to get Firmata on the Arduino

The Arduino is all wired, setup and plugged in to your PC’s serial port.
Next get the source code of the C# Sender Application from my Github Repo.

I’m using the SolidSoils Arduino Library from Github – which covers basic FIRMATA connectivity from within C#. On top of it I’ve implemented support for the NeoPixel LED Strip specific commands. This is through the class NeoPixelArduinoSession, that implements INeoPixelProtocol:

The ScreenRipper project then does the rest…

will show up in your taskbar tray.
Double clicking on it will toggle visibility of the preview bitmap – screen.png on your screen.

Also you can open Knom.AmbiLight.ScreenRipper.exe.config and fine-tune some of the settings being used..

Enjoy your ready to use Ambient Lighting!

This site uses Akismet to reduce spam. Learn how your comment data is processed.